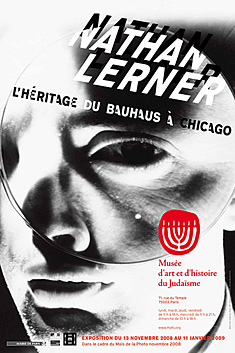 The recent exhibition ‘Nathan Lerner: The heritage of the Bauhaus in Chicago’ at the Musée d’art et d’histoire du Judaïsme in Paris was the first French retrospective of the artist, designer and photographer. The links between the two continents, Europe and America, implied in the exhibition’s title, were constants throughout Lerner’s life and work. The Musée is now one of the key sites for Lerner’s work, providing a European counterpoint to the most significant collection of Lerner’s works, including his papers and research materials, at the Chicago History Museum (for which an inventory is available at www.chicagohs.org/research/resources/online-resources/online).

In his essay in the accompanying catalogue, Gérard Audinet describes the incredible impact on Lerner of joining the Chicago Bauhaus school at its inception in 1937. Lerner had an epiphany, inspired by seeing the play of light on a sculpture by the school’s Director Laszlo Moholy-Nagy: the realisation that light could be a medium in itself, as much as paint or clay. Scarcely two weeks after joining the school, Lerner created a construction he named a light box, in which objects are lit to create a self-contained universe, transforming objects within, which could then be photographed (perhaps in part a response to Moholy-Nagy’s Light Prop for an Electric Stage?). Moholy-Nagy acknowledged his affinity with Lerner and of Lerner’s role in the Chicago Bauhaus by devoting a page to the light box in Vision and Motion (Chicago 1940). The light box was the springboard for Lerner’s later experimentation, always rooted in the material world, and it’s notable that Lerner understood even his subsequent photographs of the city in terms of the light box.

Lerner didn’t always photograph his experiments, sometimes he did not even process the film that he shot. Rarely did he make prints. For Lerner, as for Moholy-Nagy, photography not an end in itself, but a way of seeing, understanding and changing the world. Audinet places Lerner in the context of the Bauhaus’ vision of the artist and designer not as ‘the specialist but the man in toto’. In keeping with this vision, Lerner is seen by Audinet not solely as a photographer, and both exhibition and catalogue give glimpses of some of Lerner’s fascinating design projects, such as the modular house Lerner designed and built himself in 48 hours in 1951.

What’s also remarkable is that around half of the photographs in the catalogue actually predate Lerner attending the Bauhaus school. It wasn’t until 1937 that Lerner met Moholy-Nagy, but the strands in Lerner’s own work, the sense of community, form, structure and texture, are evident in Lerner’s work even in the early 1930s– and no less recognisable in Lerner’s photographs from the 1970’s.

Visiting the exhibition and reading the catalogue, I was strongly reminded of my conversations about Nathan Lerner and Henry Darger with the late Studs Terkel for this documentary. Studs Terkel described his friend Nathan Lerner as a disciple of the Bauhaus, and recalled Lerner’s compassion for the people of Chicago, as expressed in Lerner’s photographs of Maxwell Street and of Depression-era Chicago: Lerner’s ‘subjects were outcasts’, and Henry Darger could have been any one of the anonymous crowd.

At one point during filming, to underline Lerner’s connection with the Bauhaus, Studs Terkel broke off the interview to search amongst his belongings for a hand sculpture given to him by Moholy-Nagy. Acknowledging Nathan Lerner’s Bauhaus education, and Lerner’s  sensibility and values, Terkel thought it was no accident that Lerner could recognise and appreciate the work of Henry Darger, when others may have dismissed it.

Studs Terkel recalled Nathan Lerner as a humanist, and in that sense, he said, seemingly quite unlike Henry Darger, whose contact with his neighbours appeared to have been so limited. And yet, suggested Terkel, Darger’s visions of a world brought by adults to the verge of apocalypse, to be saved by children, had a surprisingly humanist dimension and was absolutely relevant to us today.